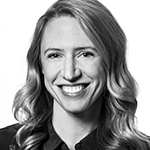 Even if she hadn’t been working remotely when she was hired as chief program officer (CPO) at the Marlene Meyerson JCC Manhattan this fall, Megan Whitman wasn’t likely to have encountered the same issues people taking a new position often do. Earning the respect of colleagues, figuring out how to order office supplies, and finding a go-to lunch spot didn’t stress her out.  Even mapping out her new commute was of no great concern. Since stepping into her new position on November 2, Whitman, former director of the JCC’s Lambert Center for Arts and Ideas, only has to remember to push the UP button on the elevator instead of the DOWN when heading to her new office.

Whitman has been with the JCC since 2008, when she was hired as program coordinator for what was then the arts and culture department, which had been primarily focused on performing arts and the Laurie M. Tisch Gallery. She was named director of the gallery two years later. At the same time, the JCC, looking to bring conversations about the broader world to the community, launched its Conversations series. “We hit a home run with Abigail Pogrebin [host of the popular What Everyone’s Talking About], “ she says. Conversations took off, featuring a financial series with Myron Kandel, an educational series with Judith Shulevitz, and, later, People Place Thing with Randy Cohen. Soon after, Whitman was running the JCC’s performing arts programming, and in 2015 the department officially became The Lambert Center for Arts and Ideas.

While she’ll miss  the intimate work of bringing artists’ projects to fruition, Whitman, who earned her bachelor’s degree at the University of Chicago and her master’s at Columbia University, knows that what she learned as director of the Lambert Center will continue to influence her work as CPO.  “It’s always been important for the arts to have a presence at the institution,” says Whitman. “It’s been a way for us to get to know one another and learn together as a community. Seeing the role that the Lambert Center played in aligning core values of the JCC taught me a lot about how you can envision programming along themes and common interests and make it relevant to different cohorts of our community.”

Following in the footsteps of Dava Schub, who served as CPO for 14 years (and is now the CEO of the Edlavitch DCJCC in Washington, DC), is a responsibility for which Whitman is well prepared. “I have run programs of all sizes and see the value of huge programs and tiny ones. I have hands-on experience with what it means to program within the community, and I’ve also seen the challenges of doing that work,” she says. “Having that as my background allows me to have a great understanding for what it means to be a staff member, and that helps me be a good advocate for them.”

Chief Executive Officer Rabbi Joy Levitt is equally confident that Whitman’s strengths will serve her well in her new role. “Megan brings a wealth of experience, intelligence, sensitivity, and creativity that inspires our staff and community now more than ever.”
While taking a leadership position at the JCC during such an unusual time may seem a great obstacle, Whitman sees advantages as well. “One of the benefits is that I experienced the overnight pivot we had to make from running in person to virtually. Now we realize that there are ways of doing different kinds of work with different expectations. I see virtual programming as a core area for us to focus on. I anticipate the community seeing it as an additional pathway to building communal bonds and enriching their lives.”
As CPO, Whitman considers herself an advocate for the programmers in each of the JCC’s 10 Centers of Excellence. “I think my responsibility is to really dig deep into what matters to our community and make sure those things are resourced well. I think it’s both knowing the needs of the community and allowing the experts we have on staff to flourish and keep that machine as well calibrated as possible.

“Dava and (Chief Executive Officer) Joy (Levitt) both showed me by example how I could use my skills and talents. Dava’s legacy is a huge one.  I will bring my own perspective, but I see tremendous value from having learned with and under her for so long.”

LIke all of us, Whitman can’t wait for the doors of the JCC to open to our entire community again. “When our reality is safe and we can be in the building, that will be very sweet for people. I hope to capture that sweetness and help people experience that in long-lasting ways.”