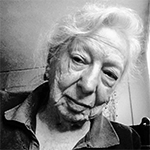 At 99, Muriel Mandell Still Has Plenty to Teach

If you think mastering today's technology is just for the young, think again. In the 20+ years since nearly 1,000 classes in personal technology have been offered to seniors at the Marlene Meyerson JCC Manhattan, close to 2,000 have learned skills ranging from computer, tablet, and cell phone basics to photo editing and streaming by tech-savvy peers like Muriel Mandell.

Mandell is not only an instructor, but also a founder of SeniorTechNYC and the JCC's SeniorNet Learning Center, which preceded it. (SeniorNet is an international organization, with individual centers teaching technology skills.) She is living proof that age is no limit when it comes to learning new skills, or teaching them. At 99, she shows no signs of slowing down.

A born and bred New Yorker, Mandell has spent her life writing and teaching. She began writing in junior high, and earned her bachelor's degree from Brooklyn College and her master's from Columbia School of Journalism. She's worked in Washington, DC as a writer for the Jewish Telegraph Agency, covering the White House, the State Department, and the Capitol during FDR's presidency.

Much of her writing has been in the form of children's books, primarily nonfiction. Through those books, she encouraged young learners' interest in topics such as science, her two then-young sons helped with the experiments featured in them. Her children's books have been translated into a dozen languages. When her sons, now a journalist and a doctor, went to college, Mandell went into the classroom as well, where, over the years, she taught high school English and graduate classes in education at City College and Hunter, and eventually coordinated a state-funded writing program and produced training manuals for the New York City Board of Education.

When she retired from education, Mandell went back to writing, and, at 90, began writing adaptations of legends and original children's stories for an app for kids. "At first I didn't even know what an app was," she said. She continues to work with Bank Street College of Education's Children's Book Committee to help put out its annual collection of best children's books.

Mandell's family has always been computer literate, she says, but it wasn't until 1994 that she started taking tech classes herself.  At the time, she "knew a little something, but not a lot." When the SeniorNet classes she had been taking and then teaching at  the Hudson Guild stopped being offered, she began participating in a center at the Jewish Guild, where the JCC was then operating.  She and two co-coordinators moved the program to the JCC's current location when the building opened in 2002. In 2016, she and the others who had been running the program at the JCC felt ready to start their own, and SeniorTechNYC was born.

"Muriel's commitment is unparalleled," says Joan Kushinoff, a co-founder of the program at the JCC, who has worked with Mandell for many years. "She taught us all to be committed volunteers and change as our student's technology needs changed, and continues to bring inspiration and insights to our organization."

Though the number of classes Mandell teaches have dwindled considerably since the programs switched to Zoom ("Quite the challenge," she says), she still teaches one or two per semester.

But despite its challenges, Zoom has definitely been "a lifesaver" for seniors, she says.  "We can talk to one another, and it allows more seniors to stay connected with friends and colleagues."

Outside of SeniorTechNYC, Mandell has plenty to keep her busy. She takes Spanish, art, and playwriting classes through the United Federation of Teachers. She has volunteered for other community centers as well as libraries. "I feel like one of those overprogrammed teenagers," she says.

Mandell firmly believes that age should never be a barrier to learning. "How else are you going to stay alive?" she says. When asked how her students react when they learn that she's 99, she says, "I don't think they know. I don't think I look older than 91."