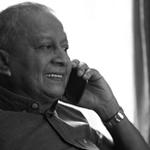 A Community that Cares

When the JCC closed its doors in March to prevent the spread of COVID-19, the daily routines of many of our members changed dramatically. For seniors--one of the most at-risk groups for contracting the coronavirus, as well as a major segment of the JCC community--many of those routines provided vital social interactions they weren't experiencing anywhere else. Realizing the impact its closing would have on this vulnerable population, the JCC sprung into action. Working together, four separate areas of the JCC--the board of trustees, The Joseph Stern Center for Social Responsibility, the 60+ Older Adult department (including the Engage Volunteer Service Corps), and the development department--compiled a list with the names and numbers of close to 2,500 people 70 or older who had connected to the JCC in some way over the past year, and divided it among 130 volunteers. This group reached out to every person on the list.

Of those called in the early weeks of the pandemic, approximately 80 had immediate needs-- help obtaining groceries, medications, etc. In that round of calls, finding food for the upcoming Passover holiday was of particular concern. The Caring Committee, as the initiative was called, helped them connect with agencies and programs that could be of assistance. Many were simply looking for conversation.

Another huge part of what the seniors needed was tech help. This led to numerous Zoom trainings, offered as frequently as twice daily. Crucial to that effort has been Engage volunteer Barry Elkins, who has managed a team of volunteers to lead the tutorials, which, as of June 19, over 1,000 individuals had attended. Elkins, founder of the Engage Tech Soup technology assistance project , used his know-how to swiftly implement the Zoom trainings for the JCC community.

"My first call, once it became clear that the JCC was going to be closed, was to Barry," says Rabbi Brian Fink, director of Engage. "We brought him up to speed, as well as many of the other Tech Soup volunteers, who became active members of the Zoom team." In addition to the tutorials, attended by as many as 25 people per session, the volunteers have been able to provide one-on-one help to those who needed it. "We can't emphasize enough how invaluable these volunteers have been," says Susan Lechter, senior director of adult programs. "The fact that they understand the mindset of the older adults in need of tech help has been so meaningful."

A second round of calls was made in May to the same list. Many were primarily in need of a "phone buddy," someone who would call to check in and simply chat on a regular basis. For callers like Betsy Margolis, the JCC's 60+ program manager, and social work intern Orah Wilens, the ability to relieve the loneliness of now isolated seniors in our community has been a moving experience.. Wilens has been reaching out to one woman, a Holocaust survivor, one or two days a week. Sometimes the woman calls WIlens, instead of the other way around, because she is "looking for words to lift her day. It's nice to know I have a role in her life," she says. For a woman who had been the primary caregiver for a decade for her 99-year-old father, who recently died, "the JCC was there when she needed someone to talk to," says Margolis. "It was important to me to be there to share in her grief and help her take a step forward." Some needs have been more logistical. Margolis spoke with a woman, who despite a significant physical challenge, insisted she was able to get on a bus and buy groceries, but needed help getting them home. Margolis helped her arrange for a service to help her get home. Another's need was as simple as obtaining a light bulb--and finding someone to help her install it. "From connecting someone who's lost a spouse or family member to helping someone with limited mobility," says Margolis, "everyone needs to feel like they're thought of, that they matter. The JCC makes them feel that way." "It's important for people to know that there is someone out in the world who is thinking about them," says Sheryl Parker, director of The Joseph Stern Center for Social Responsibility. "It's given us an opportunity to learn about what people need and what we can do to meet those needs. I'm really proud that we've done this."