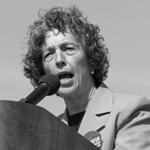 When the JCC's Joseph Stern Center for Social Responsibility was launched, it already has significant muscle behind it.

Its origins are in Ma'yan, which, through nearly 25 years at Marlene Meyerson JCC Manhattan, provided feminist, social justice, and leadership training to women and teen girls. And with decades of political and social justice experience, Ruth Messinger, the center's social justice activist in residence, and its staff, are working to spread justice and activism throughout the JCC and the community as a whole.

"Ruth's appointment has generated a lot of excitement," says center director Eve Landau. "She knows everybody. She helps give us access to organizations and individuals we might not have had access to. It's a win-win for the JCC."

Messinger was elected to her local school board in 1975, served on the New York City Council from 1978 through 1989, and was elected Manhattan Borough president in 1989. In 1998, she became president of American Jewish World Service, created to make visible the importance of the Jewish community in the fight for global social justice. She became its global ambassador in 2016. JCC Executive Director Joy Levitt joined AJWS on trips to Haiti and Senegal.

In 2004, when AJWS created the Save Darfur Coalition, the JCC was instrumental in encouraging Upper West Side synagogues to support the groundbreaking Save Darfur March in Washington, as well as helping organize buses to transport scores of New Yorkers to the march itself.

Messinger has strong philanthrophic roots. Her grandfather was the first president of Federation of Jewish Philanthropies and first chairman of the board of Surprise Lake Camp, the oldest Jewish overnight camp in the US. Her mother was involved with negotiations about the NYC foster care system and joined Rabbi Abraham Joshua Heschel and Martin Luther King Jr. on the march from Selma in 1965; for 50 years her father was a trustee and treasurer of the Jewish Home and Hospital.

"I was raised with these values," she says. "It wasn't just about Jews, but about how we should respond to all people in need, and whenever it would be effective, to influence policy."

Fortunately, at Marlene Meyerson JCC Manhattan, there's "no need to reinvent the wheel." Many programs are already "deeply infused" with social justice values, says Landau. "She'll encourage the centers that need more awareness that social justice has a role in their programming and explore how to create that role."

Outside of the JCC, Messinger takes great pride in the Upper West Side. She is the third generation of her family to live here, and raised her three children here as well. She has eight grandchildren and two great-grandchildren.

For Messinger, social justice work is never-ending. In addition to her role at the JCC, her position as AJWS global ambassador allows her to encourage rabbis and interfaith leaders to speak on behalf of the oppressed and persecuted. She is a social justice fellow at the Jewish Theological Seminary, developing and supporting social justice activities in congregations across the country.

At the JCC, she hopes to "help a great community institution figure out where it fits at this point in time on the issue of social justice and how much it can contribute." She says, "Very often, the programs here provide people with a new opportunity to connect. At the JCC, we're saying that very often there's a Jewish connection to the work people want to do." Chief Program Office Dava Schub says facilitating that connection is "an opportunity we can't squander."