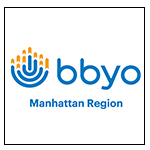 As members of Empire AZA and L’Dor Vador BBG, the two chapters of BBYO Manhattan based at the Marlene Meyerson JCC Manhattan, Zachary Traum, 17, and Daniela Koplin, 16, have proven themselves to be capable and innovative leaders. In their roles as regional s’gan (vice president of programming) and regional sh’licha (vice president of Jewish enrichment), respectively, the two have been responsible for planning engaging programs for the approximately 350 participants in the region’s seven chapters throughout Manhattan and the Bronx.

But this year, during BBYO’s annual International Convention, a hybrid event held over Zoom and in person in February, the high school juniors took their leadership roles even further as they were elected by a body of their peers from around the world to serve on BBYO’s International Board, with Zach named 97th Grand Aleph s’gan and Dani 33rd international sh’licha. They will begin their year- long terms in June.

Jon Zeftel, BBYO Manhattan’s regional director, says the teens’ “passion shining through” was key to their election. The two are the first-ever Manhattan Region members to serve on the International Board. “It’s a big moment for them and for BBYO Manhattan,” Zeftel says. “They’ll still be a presence here, but will have different priorities. From my perspective, the best part of this is that Dani and Zach will still come around to our local events and serve as role models for the younger Alephs [male-identifying teens] and BBGs [female-identifying teens].”

BBYO Manhattan launched in 2014 with the introduction of two new groups at the JCC. It is one of 40 BBYO communities in North America and more than 50 worldwide. While each new group started out with just a handful of members, they grew rapidly. Today, Empire AZA has over 70 members; L’Dor Vador BBG has over 100.

As part of the 12-member International Board, Zach and Dani will build on skills and experiences they developed through their roles in their chapters as well as on BBYO Manhattan’s Regional Board.

In his post as regional s’gan, Zach, a student at Hunter College High School, planned programs and conventions for members throughout Manhattan. “I’ve tried to convey a sense of fraternity through fun bonding programs,” he says, “and enhance friendships through deep conversations. It’s been amazing watching all the people in my chapter grow as people.” Moving forward, Zach will concentrate on getting all regions involved in kickoff events, while mentoring his regional and chapter counterparts. His main role will be planning next year’s International Convention, which 3,500 teens from around the world are expected to attend in person.

Both agree that making connections and friends throughout the world has been a major highlight. “Before, I only knew the Upper West Side Jewish community,” Dani says. “Thanks to BBYO, now I know the global community.” Zach looks forward to following in the footsteps of the role models he’s had on his BBYO journey. “Now I’m trying to be one of those role models,” he says.

We wish Zach and Dani only the best in their new roles.