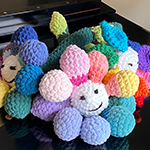 You could say that the impetus for Jordana Manzano’s recent act of tzedakah benefitting the Marlene Meyerson JCC Manhattan was the Basics of Crochet class she and her son Zach signed up for in February 2020. But its roots actually go back to 2004, when JCC Chief Executive Officer Rabbi Joy Levitt agreed to officiate at the wedding of Manzano (then Sandler) and her husband, David.

From that point, Manzano says, the JCC was her family’s second home. So much so that when her three children, Charlie, 16, Zach, 14, and Rosie, 13, were young, Manzano told them that if they were ever lost, they should go to the JCC. Over the years, both generations (as well as Manzano’s mom, Suki Sandler) have supported and/or participated in tzedakah projects at the JCC.

“Every time the JCC said ‘yes’ instead of ‘no’, we  became more involved and engaged,” Manzano says.

In the winter of 2020, Manzano, who has held various volunteer positions at the JCC and is currently a member of the board of directors, saw that the crochet class was being offered through the Lambert Center for Arts + Ideas and encouraged Zach to join her. “If it’s at the JCC, I’ll do it,” he said.

When the pandemic hit, her son’s interest waned, while Manzano’s took off, and it wasn’t long before she discovered its benefits. “It was meditative and calming, and it was something I could do while my children were at home needing me.” She also realized that it relieved the chill in her fingers that often accompanied her arthritis.

About four months after she started crocheting, friends began to commission projects. She suggested that they donate what they would have paid her to the JCC.  Word (and images) of her creations spread via Facebook and Instagram. “And it sort of went from there,” she says.

Aside from crocheting, Manzano is well known for her culinary skills. A graduate of the French Culinary Institute (now the International Culinary Center) in New York and a former event manager, she has earned a much-deserved reputation for her baked goods among family and friends, not to mention the JCC staff. But when the pandemic severely curtailed in-person deliveries, her inability to bake “for less than 20 people at a time” made her realize that this could be a natural addition to her new venture. She and her family created a logo for her business, which she named Snugs & Sweets.

Manzano began requesting that, going forward, friends and family who had ordered challah, pies, and other baked goods from her in the past donate what they would have paid her to the JCC. She has tied her suggestions for donations to what was going on at the JCC or in the news at a particular time. In honor of the 30th anniversary of the passage of the Americans with Disabilities Act last summer, she encouraged donations to ReelAbilities Film Festival: New York, the JCC’s festival spotlighting people with disabilities, of which she is a former co-chair. For the start of school in September, it was the Literacy and Math Program. In October, she suggested contributions to Adaptations (which she also has been involved with) and its jobs program, in honor of National Disability Employment Awareness Month. She then “segued into steering people to donate to programs they might have a particular affinity for,” as well as to the JCC’s Emergency Fund.

As of the beginning of March, Manzano’s creations have brought in more than $8,400 for a range of JCC programs.

In the Manzano family, giving back is a tradition that spans generations. As students in the Jewish Journeys program, Rosie, Zach, and Charlie learned about the importance of community service, and they’ve requested donations for JCC programs, such as ReelAbilities, in lieu of birthday gifts. They’ve also helped the community through the JCC’s Mitzvah Mondays program, and collected medical supplies for facilities in need, both locally and globally. And the list goes on.

Manzano’s oldest son, Charlie, shares his mother’s passion for needlework. In 2020, he launched Hats for Generosity, through which he sells custom-designed rainbow hats online. Proceeds are directed to purchasers’ choice of one of several organizations, including organizations helping homeless gay youth, Black Trans individuals, and the JCC’s Emergency Fund.

After the pandemic is over, Manzano hopes to turn Snugs & Sweets into an actual business. She’d like to get her home kitchen certified or rent a commercial kitchen to produce her baked goods, while still selling her crocheted gifts and continuing to donate a portion of her proceeds to the JCC.

“I started this as a way to spread the love. I cook for people and crochet for them to give hugs when we can’t. It means a lot to give to the JCC, which has given so much to us.”

For more information on Snugs & Sweets, visit @snugsnsweetsbyj on Instagram, email snsbyj@gmail.com, and visit the website at the link below.

For information on Hats for Generosity, visit the link below.