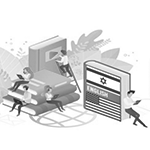 Until recently, members of the Marlene Meyerson JCC Manhattan’s Engage Jewish Service Corps, a major component of the new Wechsler Center for Modern Aging, volunteered to help those in need through organizations in their own community—or at least a neighboring one. In December 2020,Engage, made up primarily of participants age 60 and beyond, expanded its range—by about 5,700 miles.

English Overseas (EOS), an intergenerational, intercultural program, was introduced as a pilot program to the JCC by Susan Lechter, director of the Wechsler Center. The program was initiated last fall by the Department for Education of the Municipality of Jerusalem to help Israeli high school students practice their English speaking skills in preparation for rigorous exams required for graduation. The students, from a range of schools and religious backgrounds, are paired with senior volunteers, with whom they have weekly conversations. In addition to helping the students improve their skills, the Israeli team thought the program would serve as a welcome diversion for the students and older adults during the pandemic. The goal is for the program eventually to include more schools in Israel and draw volunteers from different communities within the United States.

“This initiative has been a wonderful cross-cultural collaboration,” says Lechter. “It has been heartwarming to see bonds develop between volunteers and students, particularly during a pandemic.”

Rabbi Brian Fink, director of Engage and co-leader with Lechter on the EOS initiative at the JCC, added the project to the Engage roster of virtual volunteering opportunities and began communicating information about it to the Engage community in the fall. Marcy Gregory signed on as a volunteer leader and quickly recruited fellow volunteer Barry Langer as a co-leader. Randy Solomon has since come on as a third leader. A mailing introducing EOS to potential participants, in October 2020, netted 52 responses.

Senior applicants first filled out questionnaires; Langer, Gregory, and Fink interviewed them over Zoom to get a sense of who they were and their appropriateness for the program. “We were very impressed,” said Gregory. The information on the volunteers was passed on to the EOS staff in Jerusalem, who made the matches.

The pairs came together for the first time via a Zoom launch party in late November, and began speaking one-on-one in December.

Training materials, curriculum, and guidelines for the calls, conducted mostly over Zoom, were put together by both the New York and Israeli teams. “The Municipality has been very well organized,” says Gregory. Students, ranging from high school sophomores to seniors, are responsible for initiating the calls. They are given instructions on Zoom etiquette, and both parties are given lists of approved topics to discuss. Initially, teens were asked to choose a specific topic ahead of each call, but volunteers quickly discovered that teenagers will discuss what teenagers want to discuss.

Which is to say: “their lives, what’s going on, their families, what they did on vacation, friends, volunteers’ lives, the weather, etc.,” says Gregory. “The teachers told us the most important thing was to get them to speak. We’re not tutoring, we’re conversing.”

Volunteers are advised to keep information about students confidential, provide positive reinforcement and constructive feedback, and be sensitive to potential cultural differences. At monthly Zoom meetings with the JCC EOS team, they share their experiences and receive program updates.

While students were originally responsible for sending out weekly Zoom invitations via email, it quickly became clear that many don’t use email. Langer says that in response, they are working on training volunteers on WhatsApp for texting or messaging.

Many students have limited English skills, so making them feel comfortable with the conversations is essential. “You have to develop a relationship and encourage them. They have to know it’s a safe environment,” says Gregory. Part of that safety is knowing that volunteers will be encouraging, not critical. “It does seem that whomever had the vision of pairing the students with seniors was on the right track,” says Langer. “Children are not embarrassed to speak to us.”

Feedback from the teens is equally positive. “Every meeting brings something new and different,” says Mordechai. Another student, Nehorai, adds, “The conversation flows and teaches both sides lots of new things.”

“My student is delightful,” says volunteer Sandy Merrill. “She is speaking more and opening up more as we get to know each other. It is a great match and I think we are both enjoying our talks.” Jerusalem’s mayor, Moshe Lion, has also expressed interest in the program. A meeting between Mayor Lion, volunteers, and students is scheduled for February.

Volunteers share impromptu vocabulary lessons through the Zoom chat option, and, in Langer’s case, use riddles to teach new words. Some share recipes, and one student has even had a family member sit in on the sessions, so that they could improve their English skills as well. Volunteer Billie Baren encouraged her student to tell her a fairy tale. “Everyone has their own techniques,” Langer says. Volunteers are also asked to be alert to any irregularities or issues students may be having. If a student is disengaged or overwhelmed, if they or a family member has been ill with COVID-19, or there appear to be other family issues, they know to reach out to the program’s leaders.

For many students, the exam that the calls are meant to prepare them for is a year or more away, making the program’s success something based on more than just grades. “It’s not just the conversation that’s important, but the ability to learn about things outside their realm,” says Gregory.

The reactions, from the volunteers, students, and coordinators, make the value of the program clear, even beyond pandemic times. “It offers depth and opportunities for community-building, as well as engagement for volunteers,” Gregory says The second phase of the pilot is beginning in February, as more volunteers are recruited to accommodate the additional students interested in the program.

Click here to read more about the Wechsler Center for Modern Aging.