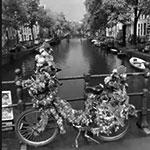 Virtual Journeys Give Connections Members a Passport to the World

When opportunities to travel locally closed up this year for participants in the Marlene Meyerson JCC Manhattan's Connections group, they didn’t let it slow them down. Instead, they embarked on a global adventure.

A program of The Jack and Shirley Silver Center for Special Needs, Connections serves people in their 20s and 30s with intellectual, developmental, and/or physical disabilities. In addition to the many offerings that take place at the JCC itself, during the summer, the group’s members typically take a variety of trips on a weekly basis. Outings to Governors Island, Rye Playland, and the Transit Museum, and overnight trips to destinations including Rhinebeck, NY, and Lancaster, PA, are past highlights.

And while the Center has worked extraordinarily hard to provide its community with virtual programming since COVID-19 restrictions began, the loss of opportunities to travel was greatly felt. Realizing that the limitations on in-person travel did not apply online, Connections’ director, Hannah Badain, and its coordinator, Lori Rosenfeld, came up with a way for the group to tour the world, virtually.

Since the program began in June, Connections members have explored a new country each week, discovering aspects of that country’s culture, cooking, sights, and more. Via Zoom, professional guides, friends of friends, and family members give the virtual travelers an insider’s view of their part of the world, which has included Italy, Paris, Mexico, Greece, South Africa, Amsterdam, Israel, Hawaii, Japan, Argentina, Cuba, London, and Australia.

With nine sessions per destination over the course of a week, there's plenty to explore. There’s the actual sightseeing element, with Connections participants enjoying virtual walking tours, though they’ve “traveled” by bike and car as well. In Rome, the group’s first stop, the tour guide brought participants to the Jewish Quarter, where they saw the stones in the ground that memorialized those lost in the Holocaust. "Moments like that have been very special," Rosenfeld says.

The majority of the guides were found through an organization called Withlocals, which typically offers in-person tours, but is now doing some virtually. Airbnb is another source. While "in" Australia, the group met the sister of fellow Connections member Peter VanReepinghen, who showed them around her home. "Real people living in the countries we visit provide the most authentic curriculum around," says Badain.

"Our group loves learning about the day-to-day routines in different countries," Rosenfeld adds, “and enjoys getting to know the guides on a personal level.” Another highlight was the interactive experience of training dolphins through hand signals during their week in Hawaii.

The group's reactions have been so enthusiastic, Badain and Rosenfeld decided to continue the program past its expected end date. "We thought we'd transition to something different in the fall, but this continued to feel fresh and exciting," Badain says. As of now, the program is slated to run through December.

In addition to the tours themselves, which fill one or two of each week's sessions, participants learn local slang and common phrases, and add movement as they practice dances such as the tango, hula, and sirtaki, a Greek folk dance.

In a weekly session known as Tasty Thursdays, participants learn about regional recipes from a local chef or cooking instructor. In Mexico City, an instructor shared her passion for crickets sautéed in garlic and olive oil; a Peruvian chef introduced the group to ceviche. In Amsterdam, the group met someone who hosted dinners on his houseboat and showed them around the boat, which was a big hit.

Connections member Safia Alrawi’s hands-down favorite chef was her brother, who showed the group how to prepare hummus during the week they explored Israel. A frequent traveler in real time, she also enjoyed seeing a favorite ice cream spot in Rome that she had visited on a trip with her family.

For the Connections "travelers," these trips are less about differences between cultures than they are about similarities, Rosenfeld says. “On a very basic level, with so many of the places we’ve visited, we learn that while we’re all so different, we’re also the same.” For the JCC, an organization that holds inclusion as one of its primary values, truer words could not be spoken.