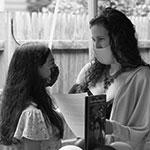 For Jewish Journeys Students, Plan B Was the Great Outdoors

When the seventh graders enrolled in the Marlene Meyerson JCC Manhattan’s Jewish Journeys B-Mitzvah class began their final year in the program in September 2019, they, like everyone else, had no idea the turns 2020 would take. The fifth group to reach this milestone since the unique Hebrew education program was launched in 2012, they anticipated celebrating the completion of their learning in the JCC's auditorium, encircled by a Torah unscrolled around the celebrants and their extended families. They looked forward to presenting videos of the projects they had worked on over the course of the year on a large screen behind them with the group, capped off by a celebratory meal. But that wasn't exactly how things played out.

In early spring, with COVID-19 quarantine in full (and indefinite) swing, it became clear to Rabbi Lori Forman-Jacobi, director of Jewish Journeys, and the students’ families that alternate plans would need to be made. The celebrations, known as Off-the-Bimah, were originally scheduled for May and June, with half of the class participating in each, to accommodate the large number of family members expected.

There was no doubt that the ceremony would go on, Forman-Jacobi recalls. Many of the students had been part of Jewish Journeys since Grade 3, and the celebration, a culmination of their efforts, is a well-earned highlight. "The kids had worked so hard," she says. "They really deserved something uplifting, and postponing it until it was possible for it be indoors wasn’t a good solution."

Quickly, Forman-Jacobi and the participating families realized that the only way to mark this special occasion was to hold it outdoors. Various venues were discussed and dismissed, and after several Zoom calls with the families, in April, Forman-Jacobi came up with a location close to home—hers—in Teaneck, NJ.

"We were overwhelmed by the fact that she offered to do it in her backyard," says Marla Ratner, whose son, Sam Levine, was one of the six students who participated in the August 16 event.

The JCC's CEO, Rabbi Joy Levitt, who attended the program via Zoom, called Forman-Jacobi “an unstoppable force of dedication to these children and their families.” While some elements of past celebrations, including the unscrolling of the Torah, the inclusion of grandparents and others at the ceremony, and the big-screen presentations, had to be shelved, several remained. The teens each discussed their Torah portions and presented their projects in the form of collages, artwork, and photos, most of which centered on social justice issues, and all of which were shared on Zoom. They were all called up to the Torah and received a beautifully calligraphed certificate. Music was provided by Naomi Less, a ritual worship musician and singer/songwriter who had performed at previous ceremonies and taught several Jewish Journeys classes. Rabbi Mick Fine, who had taught the celebrants all year and worked with each of them on their dvar torah and project, led the service.

Laurie Ehrlich, whose daughter, Katherine Emmer, was one of the celebrants, said the change of venue actually allowed her family to invite more guests, who watched on Zoom, than they would have been able to do otherwise. Families working together to pull off the alternate ceremony became close, resulting in an intimacy that would have otherwise been unlikely. "I think this made the families feel more connected," said Ehrlich. "It was an adventure together."

Instead of dancing the hora as a group, families did it around their own tables. Rather than a large cake, decorated to reflect each child’s interests; this year each had their own. A large tent, balloon arch, and centerpieces on each family's table featuring a photo of each child added to the festive atmosphere.

"Even though we couldn't do a big slide show, couldn't roll out the Torah, there was still a gravity to it," says Forman-Jacobi. "It was uplifting and memorable."

And while masks and social distancing were, of course, required, and even the microphone covers were replaced between speakers, Forman-Jacobi came up with a way for kids to see their family's reactions as they took to the makeshift bimah. As each teen stood at the podium, their families switched from masks to plastic shields, allowing their pride to show through.

"Every special moment now is more special because so much is so challenging," said Levitt. “To see these beautiful children present the culmination of a year's work would have been inspiring in any case, but to see their determination to take their place in the Jewish community--despite the pandemic--brought tears to my eyes."

Photograph by Story of Life Photography

For more info on Jewish Journeys programming, click below.