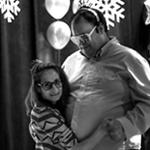 Adaptations, a group for those in their 20s and 30s that was one of the earliest innovations out of The Jack and Shirley Silver Center for Special Needs, played a key role in enhancing the life of Judy Fettman over the past 12 years. All those who know her would agree that she did the same for Adaptations. She met Marc Dreyfuss at one of the group's Chat n Chew events.

"They were the leaders in the couples group," says Allison Kleinman, director of the Center for Special Needs. "They were a power couple."

Judy, who had a genetic illness called familial dysautonomia, passed away in early June. She was 50 years old.

"Judy was a warrior," says Kleinman. "She was very strong and worked out all the time."

She was also an artist, says Kleinman, and was "funny, sarcastic, and wise." The fact that her challenges were different than those of other CSN participants allowed her to be a social leader as well. At Judy's funeral on June 9, her mother said that despite her challenges, Judy had everything she had ever wanted. "She did it all; she had it all."

Judy's role at the JCC grew over the years. Eleven years ago, as she began to age out of Adaptations, Judy and fellow CSN participant Amy Rosenfeld-Kass became the driving force behind the establishment of the extremely successful 40+ group. In the months before she died, the two formed a Lifestyle Changes Support Group, designed to address concerns participants had as they found themselves taking over the caretaker role for their aging parents.

Judy was small but mighty. She walked with a walker, yet the first thing you always noticed was not the walker, but her smile. She worked at the JCC supporting our effort to go paperless and scan and shred our old files. She always checked in on you when you passed by, shared a joke or some warm conversation, asking about this one's child or that one's job. She was a real presence, and she will be missed at the JCC and by all those who had the privilege to know and love her.

Her giving spirit lives on, even in people she did not know. Judy was able to donate three of her organs to others in need following her death.

Judy's legacy has been felt in the short time since her passing. When COVID-19 shut down many businesses, she greatly missed the opportunity to get manicures, a luxury which had always brought her great joy. Adaptations Director Cailtin McInerney thought a DIY manicure session was a great idea for a virtual program, and it was planned for early June. Judy passed away before it was able to take place, but the program, with Marc in attendance, took on special meaning–not just as a way for Adaptations participants to swap stories and learn new skills, but also as a testament to Judy's love for the JCC.

Judy's friend, Amy Rosenfeld-Kass, remembered her in the form of a poem:

….She touched everyone who
met her and everyone
who knew her loved
her. She was tough,
a fighter, a warrior, she
was very good at art,
she liked her independence
...I would like to add that she had
a great sense of
humor and made people
around her laugh and smile.

We are so grateful to the parents and the participants of Adaptations, who, over 15 years ago, not only saw a need for their children and themselves to be included in the community, but also helped us to understand the many ways in which these interactions and relationships would profoundly change all of us at the JCC.

Judy, may your memory be for a blessing.

To view an interview we conducted with Judy and Marc in 2014, click the link below.